Pollution in Russia increases along with economic growth, but only until it reaches a certain threshold, from where it starts to decrease, demonstrates a recent study conducted by Prof. Natalya Ketenci, Yeditepe University, Turkey.

The validity of the phenomenon, recognized as the environmental Kuznets curve, demonstrates a promising progress for the environmental policies and practices in the Russian Federation. Published in the open-access Russian Journal of Economics, the study also seeks to identify the relationships and causality between pollution, quantified by carbon dioxide (CO2) emissions, and the main factors which affect them.

To do so, the author employs annual data on energy consumption, real income, international trade, level of education and level of urbanization for the period 1991-2016, available from the World Bank’s World Development Indicators database. As a result, the research paper provides recommendations to policy makers in Russia responsible for the environmental quality on national level.

According to the data, Russia remains the fourth largest contributor in terms of CO2 emissions in the world after China, the USA and India in terms of total kilotons, but is ahead of the US when Gross domestic product (GDP) is taken into account. While the US contributes with 0.33 kg of CO2 emissions per 2010 dollars of GDP, Russia accounts for 0.99 kg. Furthermore, despite the global tendency of decreasing annual amounts of CO2 emissions, Russia continues to increase its own.

Interestingly, while Russia has increased its overall CO2 emissions by 14% since 1998 (8% since 2009), its quantity turns out to have actually declined by 45.6% (7.3% since 2009) when the GDP is considered. In agreement with the environmental Kuznets curve hypothesis, this is due to the gradual deployment of more environmentally-friendly equipment in a growing economy.

When studying the key factors for pollution, Prof. Natalya Ketenci concludes that energy consumption, real income, education and urbanization levels are all significant determinants, and open trade has no impact.

In conclusion, the researcher suggests that policy-makers in Russia need to continue with the implementation of policies meant to sustain economic development, thereby favoring cleaner technologies.

Efforts in raising environmental awareness among the population is also a priority. Interestingly, while education in Russia is linked to better access to advanced, yet energy-intensive technology, it is through education that people can be motivated to improve environmental quality and thus persuaded into practices such as recycling and giving up on non-renewable products.

Quite an ambiguous effect on environmental pollution is found in the case of urbanization as well. While generally linked to increased CO2 emissions as a result of greater and denser population, improved recycling organization and hygiene provisions in urban areas work in favor of environmental quality. Therefore, the author recommends that the focus for urban areas needs to be placed on maintaining current policies and decreasing energy intensity, while in rural areas, it is important to implement new efficient environmental policies. 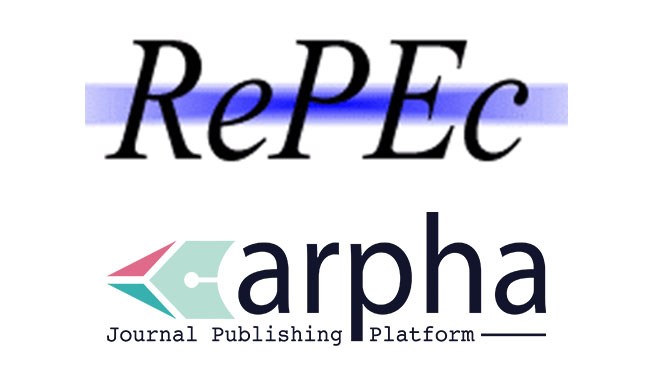 Following the recent integration between ARPHA and the collaborative project RePEc (Research Papers in Economics), journals publishing in economics will have their articles indexed in RePEc decentralised bibliographic database upon moving to the technologically advanced platform.

Working with 50,000 registered authors from around the globe, having indexed about 2.3 million research publications from 2,800 journals, and serving over 80,000 email subscriptions on a weekly basis, RePEc’s services are set to further increase the discoverability and creditability of economics papers published in any ARPHA-hosted journal.

The collaboration was inspired by the recent move of the open access peer-reviewed Russian Journal of Economics to ARPHA. Shortly after appearing on the journal’s new website provided by the platform, RuJE’s first 2018 issue, themed ‘The Austrian School of Economics: Its Reception in European Countries,’ was also available via the RePEc’s web interfaces, including IDEAS.

“Having added yet another web-service integration to the list, ARPHA once more demonstrates its flexibility and customer-oriented approach when it comes to providing a new home for journals looking to step up and provide all those innovative and high-tech features to their users,” says ARPHA’s and Pensoft’s founder and CEO Prof. Lyubomir Penev. “In times where the findability of a research publication is almost as important as its quality, I am certain that our integration with RePEc will significantly benefit our clients specialising in economics.”

Speaking in Novosibirsk, Russia, the founder of RePEc, Thomas Krichel noted, “When I set out what would become RePEc in the early 1990, my vision was of a non-proprietary system that all could contribute to, and that all could use freely. My particular concern was to level the playing field between publishers. Open access content is particularly valuable. I am pleased that ARPHA has chosen that publishing avenue.”

RePEc (Research Papers in Economics) is a collaborative effort of hundreds of volunteers in 96 countries to enhance the dissemination of research in economics and related sciences.

The heart of the project is a decentralised bibliographic database of working papers, journal articles, books, books chapters and software components, all maintained by volunteers. The collected data are then used in various services that provide the collected metadata to users or enhance it.

So far, over 1,900 archives from 96 countries have contributed about 2.3 million research pieces from 2,800 journals and 4,500 working paper series. About 50,000 authors have registered and 75,000 email subscriptions are served every week.

RePEc grew out of the NetEc project founded by Thomas Krichel in 1993.

Russian Journal of Economics (RuJE) is the latest competent and renowned journal to join the ranks of the open access titles published on the next-generation platform ARPHA, developed by scholarly publisher and technology provider Pensoft.

The journal’s 2018 inaugural issue and the first since the realization of the new partnership is already live on the journal’s new website.

The articles are brought together under the theme “The Austrian School of Economics: Its Reception in European Countries” and have been briefly presented at the Second World Congress of Comparative Economics “1917-2017: Revolution and Evolution in Economic Development” held in St. Petersburg, Russia, in 2017.

Having taken advantage of the white-label publishing solution offered by ARPHA, the open access peer-reviewed journal is to continue being recognized as one of the titles founded and published by the reputed institutions of National Research University Higher School of Economics, Russian Presidential Academy of National Economy and Public Administration, Gaidar Institute for Economic Policy, and non-profit partnership Voprosy Ekonomiki.

Although recently established, the journal is well-known among its audience comprising primarily professional economists working in academia, government and private sector.

Since its launch in 2015, RuJE has been providing a scholarly outlet for research findings in all fields of economics related to policy issues and is being published on a quarterly basis.

While the journal focuses on the Russian economy, economic policy and institutional reform with a broader international context and sound theoretical background, it also welcomes submissions in all areas of applied and theoretical economics, especially those with policy implications.

“I am pleased to see our new collaboration with Russian Journal of Economics coming to fruition, not solely because it looks great in our growing journal portfolio, but also for the amazing opportunity for ARPHA,” says ARPHA’s and Pensoft’s founder and CEO Prof. Lyubomir Penev. “I am certain that we can contribute a lot, so that we can together oversee the further progress of this excellent journal.”

“The task of the project is to create a competent international information resource for academic economists, expert and business communities, devoted to macroeconomic policies in different national contexts, including the Russian one, institutional issues and comparative analysis. The high technological base of ARPHA platform gives all the necessary opportunities to realize the strategic goals of Russian Journal of Economics,” says Andrey Kotkovsky, Director at NP Voprosy Ekonomiki.

What does ARPHA bring to the table?

As a result of its transition to ARPHA, not only does the journal look a lot different on the outside, but it also provides a whole range of high-tech innovations beneath the surface.

Among these is the prominent fast-track and convenient publishing workflow provided by the platform. It allows for each manuscript to proceed all the way from submission and reviewing to dissemination and archiving without ever leaving the platform’s singular collaboration-friendly online environment.

Once published, all articles are to be available in three formats (PDF, XML, HTML), enriched with semantic enhancements, so that they are easy to discover, access and harvest by both humans and machines.

To further enhance discoverability and reusability of the findings published in the journal, its content is to be indexed by major interdisciplinary services CrossRef and DOAJ in addition to the economics-specialized database RePEc.

RuJE’s articles are also to be archived in CLOCKSS and Zenodo, in accordance to ARPHA’s standard practices.

What’s on in the new issue?

In the opening article by Dr Gilles Campagnolo, Aix-Marseilles School of Economics, the reader is given a complex overview of the reception of the Austrian ideas in France, while also covering valuable information about the development of the Austrian School of Economics itself. The publication highlights the fact that these ideas increased their popularity in the country following the Russian perestroyka and the?fall of the Berlin Wall.

The topic is carried on into another two articles dealing with the history of this process in Russia (Soviet Union) and Bulgaria. The team of Prof. Vladimir Avtonomov and Prof. Natalia Makasheva, National Research University Higher School of Economics, Russia, and the one of Prof. Nikolay Nenovsky, University of Picardie Jules Verne, France, and Dr. Pencho Penchev, University of National and World Economy, Bulgaria, both identify three principal periods – initial reception, complete oblivion during the communist regimes, and renaissance in post-communist times.

The Italian perspective on the Austrian economic ideas are given in an article authored by Prof. Antonio Magliulo, University of International Studies of Rome. He explores two periods – before World War II, as linked with Menger’s influence – and compares it with Hayek’s.

The editorial by Prof. Vladimir Avtonomov looks back on the so-called Marginal revolution in economics from the 1870s. Thus, the reader obtains a firm grasp on the origins of the three European schools of economics with a focus on the Austrian one, before tracing the economic environment on the Old Continent well into the 20th century through the pages of the journal’s special issue.

Russian Journal of Economics is the third Russian title to find its new publishing home with ARPHA Platform after Comparative Cytogenetics and Research Results in Pharmacology. Several new titles are expected to join them later this year.